Stay In The Spirit

It is important to be in the Spirit. It seems in the Bible that people who came in contact with Jesus after He already ascended into Heaven were always in the Spirit and not the flesh. When John recorded the visions he saw in Revelations it all began by him praying in the spirit: 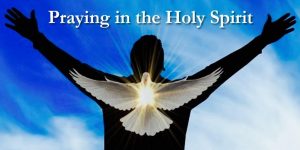 “10 I was in the Spirit on the Lord’s day, and heard behind me a great voice, as of a trumpet, 11 Saying, I am Alpha and Omega, the first and the last: and, What thou seest, write in a book, and send it unto the seven churches which are in Asia; unto Ephesus, and unto Smyrna, and unto Pergamos, and unto Thyatira, and unto Sardis, and unto Philadelphia, and unto Laodicea. 12 And I turned to see the voice that spake with me. And being turned, I saw seven golden candlesticks; 13 And in the midst of the seven candlesticks one like unto the Son of man, clothed with a garment down to the foot, and girt about the paps with a golden girdle.” Revelation 1:10-13

When Stephen was being stoned for preaching the truth the Bible says he was full of the Holy Ghost and saw Jesus standing on the right hand of God:

“9 And Saul, yet breathing out threatenings and slaughter against the disciples of the Lord, went unto the high priest, 2 And desired of him letters to Damascus to the synagogues, that if he found any of this way, whether they were men or women, he might bring them bound unto Jerusalem. 3 And as he journeyed, he came near Damascus: and suddenly there shined round about him a light from heaven: 4 And he fell to the earth, and heard a voice saying unto him, Saul, Saul, why persecutest thou me? 5 And he said, Who art thou, Lord? And the Lord said, I am Jesus whom thou persecutest: it is hard for thee to kick against the pricks. 6 And he trembling and astonished said, Lord, what wilt thou have me to do? And the Lord said unto him, Arise, and go into the city, and it shall be told thee what thou must do. 7 And the men which journeyed with him stood speechless, hearing a voice, but seeing no man.” Acts 9:1-7

The interesting thing is that after this happened Paul lost his sight for three days until he received the Holy Ghost:

“17 And Ananias went his way, and entered into the house; and putting his hands on him said, Brother Saul, the Lord, even Jesus, that appeared unto thee in the way as thou camest, hath sent me, that thou mightest receive thy sight, and be filled with the Holy Ghost. 18 And immediately there fell from his eyes as it had been scales: and he received sight forthwith, and arose, and was baptized.” Acts 9:17-18

Jesus can appear to us any way He wants but one thing is sure is that we must be in the Spirit to fully see Him and learn from Him. Some people will get blindsided by Jesus like Paul did and as they receive the Holy Ghost they will learn so many things and get a new heart and become a new creature, their eyes will be open. We can not please God in our flesh:

“28 And base things of the world, and things which are despised, hath God chosen, yea, and things which are not, to bring to nought things that are: 29 That no flesh should glory in his presence. 30 But of him are ye in Christ Jesus, who of God is made unto us wisdom, and righteousness, and sanctification, and redemption: 31 That, according as it is written, He that glorieth, let him glory in the Lord.” 1 Corinthians 1:28-31

Besides being blindsided by the Lord into salvation like Paul was and many people who were saved out of nowhere by Jesus appearing to them, no one that is in the flesh is seeing Jesus. Especially in unrepentant sin. Our flesh can not handle His greatness that is why we must be in the Spirit at all times as Christians.