Posted on January 3, 2020 by Administrator 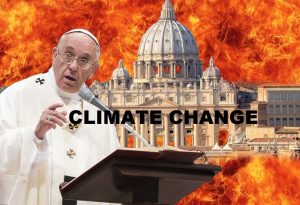 Liberals, tree-huggers, hippies, demoncrats, the European Union, the UN and the Pope are all worried about a lie called “Climate Change”. Just the fact that all of these people are pushing this nonsense is enough to know that its origins are of the devil. We know that the earth is going to burn up, the Bible tells us so:

“But the day of the Lord will come as a thief in the night; in the which the heavens shall pass away with a great noise, and the elements shall melt with fervent heat, the earth also and the works that are therein shall be burned up.” 2 Peter 3:10

God is angry with the entire world. Every false demonic thing that could be thought of is being pushed by left-wing activists. Trannies, pedophiles, gay marriage, beastiality, abortion, not knowing what bathroom to use, and a lot of other wicked things which are a result of rejecting Jesus Christ are the reason that this earth will burn up and it is the reason that Hell is enlarging itself with so many foolish people falling for these lies and becoming sympathetic to them:

“Therefore hell hath enlarged herself, and opened her mouth without measure: and their glory, and their multitude, and their pomp, and he that rejoiceth, shall descend into it.” Isaiah 5:14

“But whoso shall offend one of these little ones which believe in me, it were better for him that a millstone were hanged about his neck, and that he were drowned in the depth of the sea.” Matthew 18:6

Maybe the rising sea levels are due to all of the child molesting priests being thrown into the sea with millstones around their necks. And all of the wicked governments of all of the nations of earth passing laws allowing abortion and gay marriage and drag queens to read to children in libraries will be dealing with extreme climate change. They think the wildfires in California are a coincidence and blame it on climate change. California is the most wicked God-hating place on earth and is bringing its judgment to itself.

“The wicked shall be turned into hell, and all the nations that forget God.” Psalms 9:17

Climate change is coming to the earth and it is not because of people driving full-size pickup trucks it is because the world hates God. They will use scare tactics on rising sea levels and melting ice caps to try and take freedoms away from people, redistribute wealth, and control every aspect of life. God is the only one who causes the water levels to rise, the earth to heat up and allows destruction to come, they need to fear Him not fossil fuels:

“And the Lord God of hosts is he that toucheth the land, and it shall melt, and all that dwell therein shall mourn: and it shall rise up wholly like a flood; and shall be drowned, as by the flood of Egypt.” Amos 9:5

Jesus will not be controlled by climate change, the creation can never control the creator. The liberals will get their wish and experience climate change but all of their attempts to combat it are worthless. The only way to avoid an eternity of climate change in Hell is to repent and trust Jesus Christ for salvation, not the false wisdom of men. The earth will burn, there is nothing science or the government can do to stop it, it is foretold in the Bible, but your soul does not have to.

“1 But now thus saith the Lord that created thee, O Jacob, and he that formed thee, O Israel, Fear not: for I have redeemed thee, I have called thee by thy name; thou art mine. 2 When thou passest through the waters, I will be with thee; and through the rivers, they shall not overflow thee: when thou walkest through the fire, thou shalt not be burned; neither shall the flame kindle upon thee. 3 For I am the Lord thy God, the Holy One of Israel, thy Saviour: I gave Egypt for thy ransom, Ethiopia and Seba for thee.” Isaiah 43:1-3